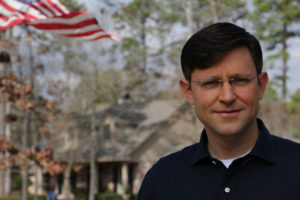 Mike is a dedicated husband and father of four, as well as a constitutional law attorney who has devoted his life and career to fighting for the fundamental freedoms and traditional values that have always been a priority to the people of Louisiana. Prior to his election to Congress, for nearly 20 years, Mike successfully litigated high profile constitutional law cases in district and appellate courts nationwide. He is widely recognized as a leading defender of the right to life, religious liberty, free speech, the Second Amendment and free market principles.

Mike was elected to the state legislature twice without opposition and served in the Louisiana Legislature from February 2015 to January 2017. As a state legislator, he received top awards from business and industry, limited government, and pro-life and pro-family groups.

Mike has solidified his distinguished reputation as a principled, full-spectrum conservative as the representative for Louisiana’s Fourth District. He has also been a trusted ally of President Donald Trump, who selected Mike for critical positions on his successful Impeachment Defense Team and the Opening Up America Again Task Force following the coronavirus pandemic.

After less than two years on Capitol Hill, Mike was elected by his colleagues to lead the largest caucus of conservatives in Congress—the Republican Study Committee. For nearly a half century, RSC has been considered “the intellectual arsenal” and the policy shop for conservatives in the House of Representatives. Under Mike’s leadership, RSC is developing the conservative playbook for when Republicans retake control of the House.

In Congress, Mike was appointed to the prestigious House Judiciary Committee which handles important oversight responsibilities such as the questioning of FBI officials like Peter Strozk and the collection of important documents related to the “Russia investigation.” Mike was chosen to be the Ranking Member of the Subcommittee on the Constitution, Civil Rights, and Civil Liberties.

Mike also plays an active role on the House Natural Resources Committee as the vice chairman of the Subcommittee on Oversight and Investigations. On this committee, he has fought tirelessly for issues critical to the people of Louisiana’s Fourth District. He has supported and introduced measures to promote the oil and gas industry, rein in excessive government regulation, and support our farmers and ranchers.

The eldest son of a Shreveport firefighter who was critically burned and disabled in the line of duty, Mike learned early on the values of hard work, honor and sacrifice. He has a practical understanding of the challenges that small business owners face because he, like his parents and grandparents, was one himself. Mike was also a conservative talk radio host and columnist, a media spokesman for America’s largest religious liberty organizations, a college professor and constitutional law seminar instructor, and a board member for national organizations and numerous community groups and ministries.

Mike and his wife Kelly, a Licensed Christian Counselor and former school teacher from Webster Parish, have been married since 1999 and have four children, Hannah, Abigail, Jack and Will. Today, they reside in Bossier Parish.