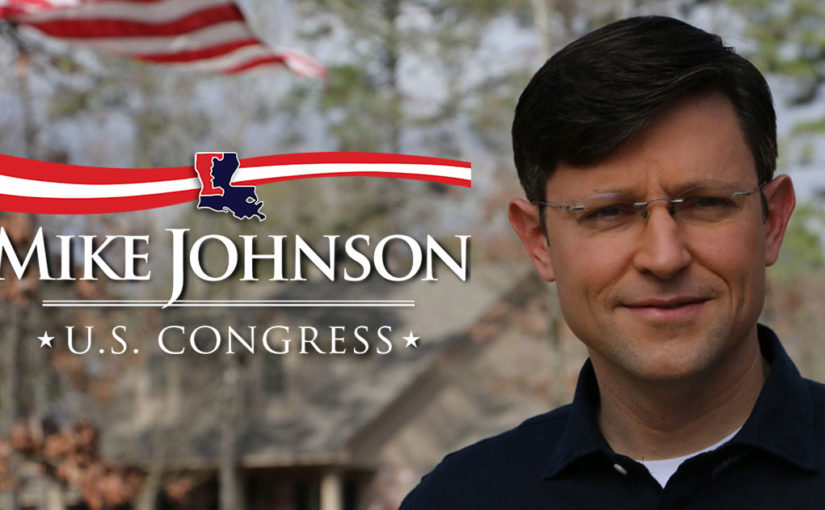 SHREVEPORT, La. – U.S. Rep. Mike Johnson stopped by the FOX33 Studios in Shreveport today to do a remote satellite interview with FOX News in New York and talked candidly about the issues facing the country and the state today.

Johnson addressed the current influx of people seeking asylum at our U.S. borders, his appreciation of President Donald Trump’s meeting with North Korean leader Kim Jong Un, as well as what he called cleaning up the foreign influences in our public policy. Read More

BOSSIER CITY, LA (KSLA) – Connected through faith and gathered in worship, hundreds came together Sunday in Bossier City to learn about their religious liberties.

“In America, there’s (sic) rights that guarantee you can live out your faith in a public way,” Dr. Brad Jurkovich said.

The pastor of First Bossier in Bossier City was among those drawn to the freedom summit at Bossier Parish Community College. Read More

WASHINGTON, D.C. (May 31, 2018) – Today, Americans United for Life submitted a “friend of the court” brief on behalf of a coalition of 90 Members of Congress to the United States Supreme Court, asking the Court to review the petition for review filed by the State of Louisiana in Gee v. Planned Parenthood of Gulf Coast.

The case involves a challenge to a ruling by the Fifth Circuit Court of Appeals that—based on its interpretation of congressional intent in the Medicaid Act—found that individual Medicaid patients have a private right of action to challenge a State’s determination disqualifying their preferred Medicaid provider in federal court.
Read More

No matter where I go across the 15 parishes that comprise Louisiana’s 4trh Congressional District, people in all our communities are clearly seeing the benefits of our historic tax reforms. Hardworking Americans are enjoying an extra increase in their paychecks, business owners are experiencing greater demand for their goods and services, and there are more jobs available now than there are workers to fill them. After just six months, the Tax Cuts and Jobs Act has helped get our economy back on track, and this is just the tip of the iceberg. Read More

On Wednesday, Representative Mike Johnson, R-LA, introduced H.R. 6213, the “History and Tradition Protection Act of 2018,” to combat the “abuse” of the Establishment Clause of the First Amendment.

A press release from Johnson says the Establishment Clause “was intended to serve as a shield for people of faith, but has been twisted and perverted into a powerful weapon to be used against them.” Read More

FORT POLK, La. (Fort Polk) – Hundreds of area residents lined Leesville’s Third Street to show their appreciation to the Soldiers of Fort Polk during a parade that recalled a similar event that occurred on the same street during World War II on March 10, 1943. Read More

Last December, Americans received one of the most significant tax cuts this country has ever seen. This, in combination with pro-growth policies from Congress and the Trump administration, has allowed our economy to prosper and American families to feel secure in their futures.

After just seven months, we have reduced the unemployment rate to its lowest point in 17 years and created more than 1 million jobs. And now, for the first time in at least 20 years, there are more jobs than there are people looking for them. But more specifically, families all across the country are enjoying benefits tailored to meet their needs and address their everyday concerns. Read More

Congress has been on August recess but Louisiana representative Mike Johnson isn’t taking a break.

He’s been a guest at several community events and gatherings in the area.

On Thursday he was at the North Louisiana Lions Club meeting.

“Everywhere we’ve been in the past month, we’ve been touting the successes of the 115th congress and the first 18 months of the Trump administration,” he said. “We’ve talked about the tax cuts and jobs acts, the regulatory reform, all the ways we re-prioritize the military, and lots of good things going on in the courts. There’s a lot to celebrate.” Read More

Rep. Mike Johnson: It’s National Day of Civility — And we sure need it!

You may not recognize it in the midst of the current chaos in Washington, but Thursday is the National Day of Civility. When I joined other members of the House of Representatives to file a bipartisan resolution last summer to make this annual designation, our aim was to bring attention to the alarming decline in America’s public discourse and the urgent need to reverse that trend. Read More